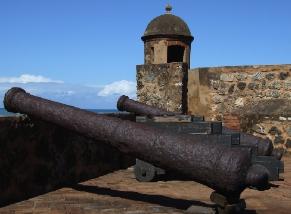 Santo Domingo is the capitol city of the island of the Dominican Republic. Visitors can get their fill of colonial history and cobbled streets in the old part of Santo Domingo, known as the Colonial City. The Colonial City stretches one square mile, and is chock full of historical sites and architecture. Founded in 1498, it is the one and only World Heritage Site found in the country of the Dominican Republic. You can see palaces, forts, plazas and churches, just to name a few. The city’s main street, Calle Das Lamas, is the oldest street in the New World. Santo Domingo, once known as Ciudad Trujillo, is home to the first cathedral, hospital, customs house and university in the Americas. If that isn’t enough, the city was founded by Bartholomew Columbus, the brother of that Columbus.

Walking tours are available in the Colonial City, offering visitors a glimpse of life in the historic area, once visited by the pioneers of American exploration like Christopher Columbus, Fernando Cortez and Francis Drake. You should plan on about three hours for the tour.

If you visit the Colonial City, you have to check out the House of Cord. The House of Cord is known as the oldest European building in the Americas, as well as the former home of Diego Columbus, son of the Christopher Columbus. A visit to the Alcazar Palace, erected in 1514 is also worth your while. The Cathedral of Santa Maria la Menor, built in 1514, is believed to be the resting place of Christopher Columbus. There are several other 16th century churches as well, including San Nicolás and San Francisco. You can still view the fortified walls of the original Spanish town.