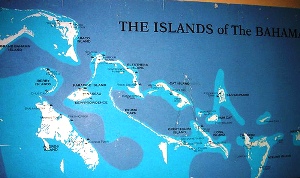 Bahamas is one of the larger island chains in the Caribbean. It’s also really close to the United States, which means you’ll be able to find affordable flights quite easily. Unfortunately, none of the European airlines fly into Bahamas.

There are several airports located on the islands in the archipelago, but two of them receive the bulk of international flights: Nassau International Airport (NAS), located on New Providence Island and Freeport Airport (FPO), located on Grand Bahamas. However, connecting flights to the other smaller islands are available from these two major airports, making it easy to reach them.

Nassau, located just 10 miles from the capital city, receives the majority of flights from the US. American Airlines has the most flights and offers the cheapest flights. Most of their flights connect through Ft. Lauderdale. Other airlines- such as Continental, Delta, United –also offer direct flights, most often through Ft. Lauderdale as well or through Atlanta. Other flights are available from New York and Philadelphia.

Air Canada also offers flights into Nassau once a week, departing from Montreal and Toronto.

Unfortunately, none of the European airlines fly directly into Bahamas. Most often travelers need to make a stop in Miami before departing to Bahamas.

Tips to get a cheap ticket to Bahamas

Considering its proximity to the US and the number of flights available, it’s quite easy to get an affordable seat in one of the planes heading to Bahamas.

Here are some tips to find cheap airfare to Bahamas: