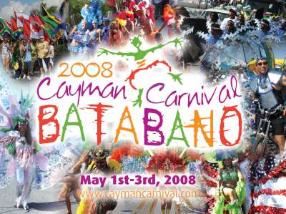 Carnival takes place on the Cayman Islands the first week of May each year. Originally known as Batabano, Carnival began in 1983 on the Cayman Islands, and is celebrated on both Grand Cayman and Cayman Brac. The celebration celebrates the diverse African and religious influences of the region, and includes a smorgasbord of costumes, music, dance and pageantry. A traditional boat launch kicks off the celebration, which offers both indoor and outdoor events. Expect rocking music, great energy, drama and dance, arts and crafts, fabulous native dishes, the country’s best local talent and one heck of a par-tay.

For trivia buffs, Batabano is a local term for the tracks left in the sand by turtles as they drag themselves onto beaches to nest.

The parade is the time for Caymans to show their stuff. This is where the hugely elaborate costume will be on show, and the music and dance will be unforgettable. Communities join together to create floats

Districts and corporate groups join together to compete for prizes for the elaborate costumes featured in Carnival. The costume design and choreography become more elaborate each year, giving competitors a true run for their money. Designs were traditionally inspired by area marine life, but are now often used to comment on a social issue.