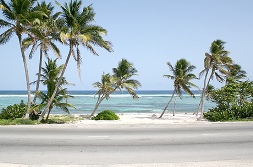 The beauty of the coral reefs and the crystal clear water which surrounds them, have recommended the Cayman Islands as one of the best diving locations in the world. Add incredible beaches and some great restaurants and you’ve got a picture perfect vacation destination in the Caribbean.

Although there is plenty of accommodation on the three islands which form the Cayman Islands, the prices are relatively high. Despite the “general trend” in the Caribbean, Cayman Islands aren’t known for the all-inclusive resorts. There are some such resorts but in general you’ll find smaller hotels.

The majority of hotels are on Seven Mile Beach in Grand Cayman. But if you are looking for a dive resort head off the “strip” or go to Little Cayman, known for its unique diving spots.

The islands aren’t gay-friendly so it’s better to avoid them if you are part of that minority. They are, however, one of the best places to spend a family vacation or elope for a dream wedding.

Nudity is prohibited and that includes topless sunbathing.

>>more information on Hotels and Resorts in Cayman Islands

As a Caribbean destination, the Cayman Islands are popular for the beaches and scuba diving. However, there are other things to do, including rock-climbing.

Besides the sports, visitors can also enjoy a bit of architecture and history. Walk along the Seven Mile Beach in Grand Cayman for some colorful views of the hotel “strip”.

Also on Grand Cayman, visit the Pedro St. James national historic site. You can visit the museum and explore the historic house.

If you want to explore the nature, spend some time at Queen Elizabeth II Botanic Park, also on Grand Cayman.

Want to see some turtles? Head to Boatswain’s Beach which is home of the Turtle Farm on Grand Cayman.