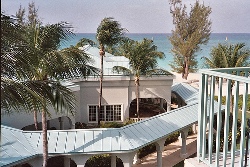 You’ll find the majority of the hotels in Grand Cayman, on the so called Seven Mile Beach.

Nested between Cuba and Jamaica, the Cayman Islands have “true” Caribbean weather. There is little difference in temperature between the seasons and the weather is nice all year round. The wet season lasts from mid-May to October with afternoon showers quite common but they last just enough to cool the air a bit. During winter (peak season) temperatures average 75 F during the night and 68 F during the day, while during summer the average daily temperature is a bit higher (83 F).

The prices are at their highest between mid-December and mid-April, while during the off season they are as much as 40% cheaper.

This resort is one of the oldest properties on the strip. It’s located close to the capital of George Town. The resort doesn’t have a restaurant but each room has a kitchen so guests won’t be left hungry anyway. There is a nice pool. There is free internet access in rooms as well as cable TV and all rooms have private balconies. Not all rooms have AC though. Prices range between US$205/night/room and US$595/night/room.

This hotel located close to George Town is suitable for those looking for affordable accommodation. All room in this 2 stars hotel have AC, telephone and cable TV. Some also have a kitchen. There is a pool as well as a tennis court available for guests. Prices range between US$110/night/room and US$190/night/room.