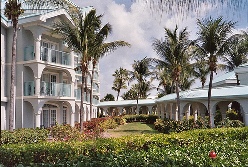 The bulk of the accommodation is on Grand Cayman but there are plenty of options on the smaller islands as well.

The dive resorts are located off the main hotel “strip” Seven Mile Beach in Grand Cayman. On Little Cayman you’ll also find plenty of dive resorts and some of the best diving places in the Caribbean.

The peak season starts in mid-December and ends in mid-April. The prices are at their highest and the hotels are pretty much booked up. So if you have a bit of flexibility, consider visiting the islands during summer. The weather is still warm, the accommodation is really cheap – as much as 40% cheaper than in peak season – and it’s not exactly crowded either.

This resort, rated at 3 stars, is located in Grand Cayman, on the northwestern shore of Boatswains Bay. The property doesn’t have a private beach. It’s a resort dedicated to divers with a dive shop and possibility to take diving lessons. There is also the possibility to dive for an unlimited time at two locations. All rooms have AC, cable TV, direct phones, coffeemakers and many other facilities. There are only 18 rooms and the prices include the resort fee. Price range between $240/night/room for a standard room and US$495/night/room for a suite. It is one of the most crowded resorts in the area so make sure to book well in advance.