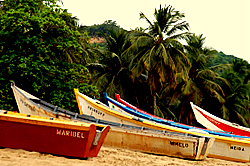 Puerto Rico is a Caribbean island with nice beaches, great food, diving and decent surfing. As a territory of the Untied States, Puerto Rico is one of the very few destinations you can now visit in the Caribbean without a passport. The climate is mild year round, but keep an eye out for storms in the summer hurricane season. You can expect tropical showers in the afternoon at any time of year. As one of the most densely populated islands in the world, don’t plan a trip to Puerto Rico to visit wide open spaces. This place is more about diving, eating and golf.

The official language of Puerto Rico is Spanish. That being said, most people speak at least a little English. You should have no trouble communicating, especially in tourist areas and hotels.

You don’t need to exchange currency to visit Puerto Rico, provided you’re visiting from the United States. U.S. dollars is the official currency of Puerto Rico. To find out about converting other types of currency to dollars, visit our currency converter. Puerto Rico is pricey by some standards, but very economical compared to many Caribbean islands. Credit cards are widely accepted.

Puerto Rico has a much wider range of accommodations than many Caribbean islands. You can find places that range from hostels to luxury all-inclusive resorts.

Yes, you can eat the fresh fruit and you really should – it’s DELICIOUS. Mofongo is my favorite Puerto Rican culinary creation made with mashed plantains and spicy shrimp. If you can get your hands on it, it’s really worth a try. Rum is the booze of choice on this island. Don Q is by far my favorite, although Bacardi is the more popular option. Watch out if you sample the Don Q…it goes down like liquid goodness. The official boozing age is 18, by the way.

Water standards are the same on the island as they are in the United States. So it is safe to drink the water from the tap if you want.

>>more information on the Best Restaurants in Puerto Rico

Puerto Rico is well connected to the eastern United States, through flights operated by everyone from major airlines to budget carriers. The island is small, so flying in to San Juan isn’t much of an inconvenience to visit any part of the island. American carriers do offer flights to other parts of the island as well, including Aquadilla and Ponce, which may make your trip even easier.

>>more information on Getting from Puerto Rico to St.Thomas (and return)

Electric outlets are the same in Puerto Rico as they are in the United States. You’re welcome to take your laptop or your flat iron and use it safely. If you have a nationwide cellular plan in the U.S., you’re covered for service in Puerto Rico.

San Juan is the capitol city of Puerto Rico, with nearly a third of the island’s population residing in the metro area. As a large city, it has the same issues of any large city. It isn’t a particularly dangerous place, but do be smart while in the city.

There are countless of things to do here, especially if you like the beach. Laguna Grande is an incredible vacation spot where you can practice a lot of water sports, go hiking or just sightseeing.

Frommer’s has put together a list of the Best of Puerto Rico, including lists for restaurants, attractions, hotels and sites. It is a very manageable island for travel, especially if you rent a car.