Love yachts? Who doesn’t. Power & Motoryacht, a publication for marine lovers, recently published its 23rd annual list of the world’s top 100 megayachts, based on size. Here we have a recap of the Top 10, because if you can’t make the top 10 your yacht isn’t really that mega, now is it? Several of these babies are available for charter, so keep your eyes peeled if you have a vacation in mind. 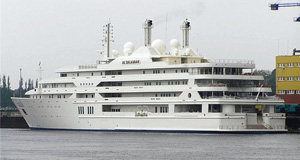 1. AL SALAMAH: At a whopping 456’10”, this is both the largest and most secretive yacht. The floating island belongs to Prince Sultan bin Abdul Aziz, the Defense Minister of Saudi Arabia, and the interior is a mystery to all but a select few. Rumor has it, the yacht features more than 80 rooms, a crew of 96 and an indoor swimming pool.

2. RISING SUN: Measuring in at 452’8”, the Rising Sun is jointly owned Larry Ellison and David Geffen, the head of Oracle and a Hollywood big shot respectively. You can shoot hoops while aboard, and there is a special landing craft specially designed to carry an SUV ashore. Very ecologically responsible.

3. OCTOPUS: At 414’0”, this baby owned by Paul Allen has spanned the globe. Aboard, you’ll find a “toy” boat that resembles a submarine. The deck features not one, but two helipads. 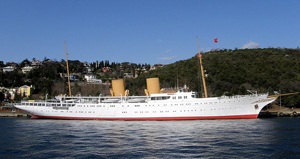 4. SAVARONA: The Savarona, measuring in at 408’ is an oldie, but goodie. She was built more than 75 years ago and this boat is available for charter! You’ll love the 282 foot long grand staircase and the authentic Turkish bath. 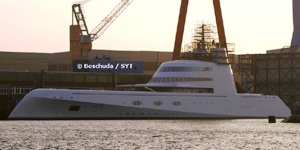 5. A: A, the newest ship on the list (as well as the one with the shortest name), is a sizable 394’. Dubbed the “Ugliest Yacht in the World” by the Wall Street Journal’s Wealth column, this yacht is owned by Andrei Melnichenko, a 36-year-old Russian who made his money through banking and energy companies. 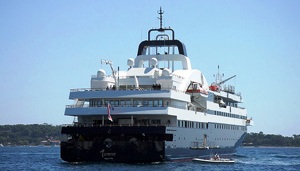 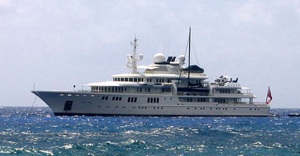 7. TATOOSH: Paul Allen’s second yacht (because one just isn’t enough), measures in at 302’8”. Brad and Angelina, with brood in tow, spent time on this boat prior to the Cannes Film Festival earlier this year.

8. ICE: This yacht, with its uninspiring name, is a lengthy 295’3”. It’s owned by Suleiman Kerimov, a Russian billionaire.

9. LAUREN L: The Lauren L is also 295’3”, tying with Ice. The ship is owned by Liveras Yachts, and it is available for charter for $1.2 million per week. Formerly the Constellation, the Lauren L can sleep 48 guests and includes an expanded sundeck, sauna, hair salon, and other health and beauty amenities. 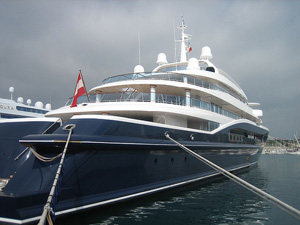 10. CARINTHIA VII: At 321’5”, the Carinthia VII is the largest yacht in the world owned solely by a woman. Props to Heidi Horten, a German retail giant for her big boat. Its home is the International Yacht Club of Antibes.

According to the press release, a megayacht is a privately owned yacht that measures in at a minimum of 80 feet long. That’s bigger than some of the private islands for sale in the Caribbean. All said, there are about 4,000 yachts that fit the bill these days.

“With millionaires giving way to billionaires, not only does the demand for new megayachts increase, but also luxury and size,” said Diane M. Byrne, Executive Editor of POWER & MOTORYACHT. “In fact, the top two yachts on our list are longer than Giants’ Stadium.” She added, “And while the owners flaunt their wealth with the size of their yachts, at the same time many keep their contents and amenities a tightly guarded secret, so rumors abound.”