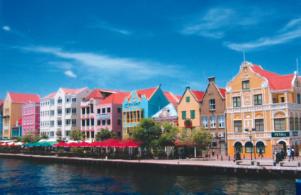 Willemstad is the World Heritage listed capitol city of the Caribbean nation of Curaçao. It is known as the most picturesque city in the islands for good reason. Willemstad is a traditional port city, with beautiful examples of colonial dutch architecture. The city covers an area of approximately 450 square kilometers, and has a population of 135,000. Yes, it is the capitol city and it is smaller than a California suburb.

The city is divided into two section, Punda and Otrobanda. Shoppers will find duty free goodness in both sections. The downtown is extremely walkable, with lmost of the stores located within an eight block radius. A good deal of the downtown area is closed off to automobile traffic, making life easier for pedestrians.

Architecture: There are 750 historic buildings in Willemstad alone, which merit preservation as World Heritage sites. Restoration projects are ongoing.

Emma Bridge: Emma Bridge is the only floating pontoon bridge in operation in the world. It connects the two sections of the city.

Floating Market: You can take advantage of the fresh seafood and produce being sold at Willemstad’s floating market.

Fort Amsterdam: Fort Amsterdam is found on the point of the Eastern harbor entrance. Built in 1635, it is the most important fort on the island. The fort is an UNESCO World Heritage site, and you can see a cannonball fired by Captain Blight’s troops in the southwest wall. At the fort, you’ll see the Governor’s residence, the Ministry, several government offices, and the United Protestant Church, which includes a museum.

Hato Caves: Just north of Willemstad on the Roosevelt Weg, you’ll find the Hato Caves near the airport. You can take guided tours of the caves, viewing the stalagtites and stalagmites, with formations called the Pireate’s Head, the Sea Tortoise and the Giant (form Jack and the Beanstalk). During the slave trading days, the caves were used as a hideout.

On the water, you can enjoy deep sea fishing, an underwater park, and gorgeous beaches. Landlubbers can take in the casinos, not to mention the excellent international and local “krioyo” dining.

Most visitors arrive in Willemstad by plane. You can check out our Flights to Curacao for more information.