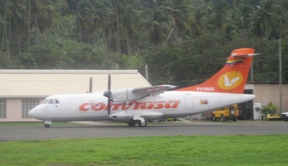 Dominica is a remote island in the Caribbean. In addition to it remoteness, it lacks proper infrastructure for tourism. Its airport is too small to accommodate large airplanes so flights from long-haul destinations can’t arrive directly here.

The main airport on the island is Melville Hall (DOM). If you want to get to Dominica you first need to fly into Antigua and then take a flight on Liat, the small Caribbean airline. But that can get costly as the most often the only way to get to Antigua is via Puerto Rico.

Tips to get a cheap ticket to Dominica

No matter what you do, flying to Dominica is expensive. That’s because of the connections involved. Booking as early as possible and flying during the shoulder season –early December and early April- might save you some money but not enough to call that a “cheap flight”.