The weather patterns vary from island to island, but in the Caribbean the weather is beautiful year-round. Temperatures don’t hit extremes and vary little from season to season.

The Caribbean is a tropical region but the chances of any island being hit by extreme weather at any given time are extremely slim. If a hurricane hit before you left on vacation, don’t worry. Just ask the local business about the extent of the damage. Also, when you travel, always purchase travel insurance (as you’ll be protected from cancellations due to extreme weather).

In the Caribbean, the weather pattern is divided into two seasons. The wet season – June to November – is characterized by short heavy rain followed by sun. The peak season starts right before Christmas and ends in late April or even May. To save money on both flights to the Caribbean and accommodation plan to spend your vacation between May and September.

The Caribbean area is large and it would be impossible to list all the islands. Here are some average temperatures and details about the weather on some important islands.

The Bahamas archipelago comprises over 2,000 islands, including the small coral reefs. Travelers typically head to Grand Bahama, New Providence Island and Paradise Island. The climate is tropical marine. In Bahamas the January average ranges between 64F (minimum) and 77F (maximum), while in July, the temperature averages between 77F (minimum) and 89F (maximum).

Cuba is the largest Caribbean island, located just 90 miles south of Florida. The best time to visit Cuba is between December and April. Cuban summers are hot and stick so it’s best to avoid them. In Havana, the average temperature in January averages between 63F (minimum) and 78F (maximum), while in July the temperatures range between 74F (minimum) and 89F (maximum).

This Caribbean nation is blessed with tropical marine climate, with little seasonal variations. It lies in the middle of the hurricane storms, so the weather can get quite stormy between June and October. In January, the average temperature ranges between 70F (minimum) and 82F (maximum), while in July, the temperatures averages between 76F (minimum) and 86F (maximum).

Jamaica is located south of Cuba and is the third most populous anglophone country in the Americas. The climate is tropical, with hot and humid weather on the coast and more temperate temperatures inland. Jamaica is located in the middle of the hurricane belt, which means sometimes it can get hit by sever storms. In Jamaica, January brings averages between 72F (minimum) and 82F (maximum), while July brings temperatures between 77F (minimum) and 88F (maximum).

For the most up-to-the-minute forecast of what’s happening weather-wise in the Caribbean, both in the Caribbean area and Mexico, check out Caribbeanweather.net . You can also check out the monthly averages on Weatherbase.com . 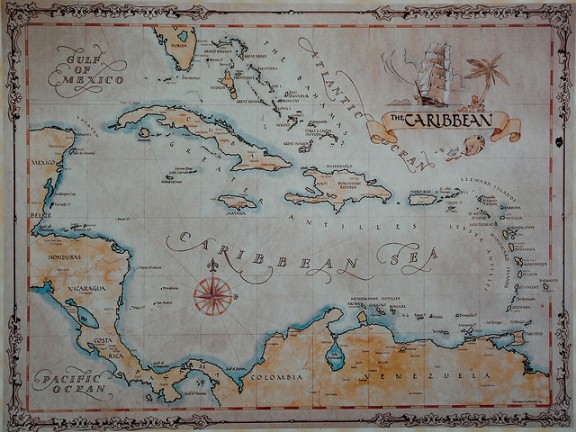