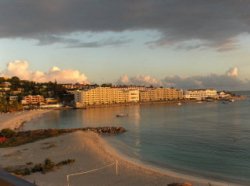 St.Maarten (alt.spelling: St.Martin) is a Caribbean island split between French Guadeloupe and the Dutch Netherlands Antilles. Philipsburg is the capital of the Dutch side, officially known as Sint Maarten, and where most of the cruise ships dock, while Marigot is the capital of the French side, officially known as Saint Martin.

Although the island is divided between France and Netherlands, you don’t need a passport to go from one side to another. There are signs which mark the border and the only separation is given by the utilities. The French side uses 250V/50Hz power while the Dutch side uses 110V/60Hz power (so make sure to bring a converter and transformer with you).

The Dutch side is more developed. The language used is English and the de facto currency is the US Dollar. This side is extremely popular among American tourists.

The French side has a more European feel to it. The language spoken is French.

The Dutch side of the island being more developed it’s where you’ll find most of the fancy hotels and resorts. But on the French side you can find the nude beach and the close-by nude resort. Most of the hotels and resorts allow you to choose the package that suits you best although there are plenty of all-inclusive packages available. There are plenty of water sports available either directly on the resorts beaches or at the near-by clubs.

>>more information on Hotels and Resorts in St.Maarten

There are 37 beaches on the island and most are owned by hotels. Beach bars and cafes go hand in hand with the beach crowds, offering incredible cuisine and cocktails. Maho Bay, locate right at the end of the airport’s runway, is one of the most popular and interesting beaches on the island.

Phillipsburg, the capital of the Dutch side, is one of the best shopping places in the Caribbean. If you fancy some nude bathing, head to the French side on Orient Beach. If neither pleases you, try one of the nature tours, either on 4×4 vehicles or on foot. If you fancy gambling you can try your luck in one of the casinos on the Dutch side.

For a fun outing, you can check out the Butterfly Farm, where you can stroll among hundreds of colorful butterflies. Or climb up to the Pic du Paradis, one of the best places to admire the island. The road is steep and it’s better approached in a 4×4 vehicle as part of a guided tour.