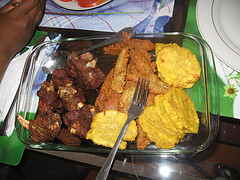 The traditional food served in Haiti has been influenced by French, African, and Native American styles of cooking. Tropical fruits such as pineapples, mangoes, and grapefruits are often included in dishes. Creole dishes found in Haiti are very similar to the creole dishes found in the Southern United States. Haitian food tends to be heavy and full of starches like potato. Rice, beans, and potatoes make up a large portion of the average Haitian’s diet and can be found in most dishes.

This is a staple food of many Caribbean countries, including Haiti. While this dish may not sound particularly exciting to foreigners, it has a distinct flavor and may quickly become a favorite of a traveler. The dish includes rice, red kidney beans, onions, and usually either pork or bacon pieces. Other flavors are added depending on the person making the dish. Hot sauce is often added to create a spicier flavor.

This is a common appetizer dish in Haiti. While a very basic dish, it is very flavorful and filling. A dough is made and then baked with a beef mixture inside. The beef mixture usually includes garlic as well as a few vegetables, often shallots and parsley. Many people add hot sauce to their patties for extra spice.

Squash soup, called Soup Joumou in French, is a filling soup that is served either as a main dish or as a side. This soup usually includes beef and/or chicken as well as potatoes, noodles, carrots, spinach, and scallions. This soup is sometimes made with pumpkins instead of squash.

Fish is a very common food in Haiti because of their location. Fish is usually boiled and sometimes grilled. Various vegetables such as carrots, shallots, and parsley are included depending on who is making the dish. The fish is usually served with tomato sauce as a flavoring. As with many dishes, hot sauce is often added to give the dish more flavor.

This pudding is made of sweet potatoes, milk, flour, nutmeg, and brown sugar. It is very filling and seet. Its a lot like sweet potato pie in the United States.