Transportation in the Caribbean 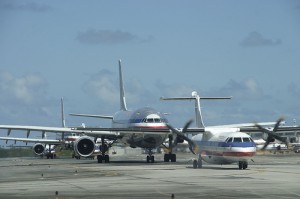 The Caribbean is a very popular vacation destination and you can easily get here either from Europe or North America (particularly the United States). Once you landed on one of the large Caribbean airports (most likely in San Juan, Puerto Rico), you can choose among various regional flights or taking the boat to get to other islands. On the islands, you can use buses, trains, rent a car, a scooter or a bike.

Arriving and Departing the Caribbean

When arriving and departing from the Caribbean, travelers will most likely land in Puerto Rico, on Luis Muñoz Marín International Airport (SJU). It is a hub for American Eagle and Cape Air and is served by a variety of important North American airlines, including: Air Canada, AirTran Airways, American Airlines, Continental Airlines, Delta Air Lines, JetBlue Airlines, Spirit Airlines, United and US Airways. It also receives direct flights from Europe offered by British Airways, Condor and Iberia. It also handles traffic to the other Caribbean islands.

>>read more about Flights to Jamaica

Getting around the Caribbean

It is possible to get around the Caribbean area by plane, cruise ship, charter flights or tour boats. LIAT offers connections between most of the islands. Caribbean Airlines offers flights between the islands, as well as flights to Europe and North America, while American Eagle serves the islands.

Once you land on an island, you can use different modes of transportation to get to the hotel. Many hotels offer shuttles (especially if you stay in a large resort), but you can also catch a bus or a taxi. You can rent a car, as well. Of course, on the large islands you’ve got several options to choose from.

In Jamaica you can take the train to travel between the cities on the island or you can choose the buses. Taxis and rental cars are also good options. In Montego Bay, you can walk, take a bus or taxi.

In Puerto Rico you can also take the bus, the train, the ferry or get a rental car. The same options are also available for traveling within San Juan.

In the US Virgin Islands you can get around by bus, taxi, boat or by car. On each of the islands which make up the archipelago, your best bets are rental cars and taxis.