The History of Baseball in Cuba 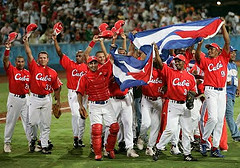 Baseball and Cuba go together like a burger and home fries; something that has been known for years. Many of the Major League Baseball’s ‘star’ players are Cuban’s who grew up playing the game. However, to Cuban’s, baseball isn’t just a game. It isn’t the same game that the Yankee’s play. While the rules are the same, the passion is not. For Cuban’s it isn’t just about a favorite pass time or a competition so much as it is about a party. It’s the country’s version of a friendly game of Monopoly.

Baseball was introduced to Cuba in the mid 1800s most likely by American sailors. The game was quickly adopted by the natives and leagues popped up all over the country. Eventually, the Spanish overseerers recognized this and banned baseball from Cuba in an attempt to force Cuban’s to follow their own culture in bullfighting. Because Cuban’s loved the game so much they formed a revolt against the Spanish and played baseball anyway. When the revolt ended baseball became a major sport in Cuba again until Fidel Castro ordered that there be no professional baseball played in Cuba. While the game was still played, it was not played as a sport. Baseball games, until this day, aren’t about who wins and who looses. The games are a fiesta. A time for everyone to get together and root for the best plays, not the best teams. It’s an expression of resistance to the Spanish and a historical past time.

Baseball is a game of the heart for Cubans and they play it with astonishing expertise. No trip to Cuba would be complete without a game of baseball.

There are many tour operators in Cuba that offer a “Home Run” tour. For a small fee tourists can be shuttled to a National Series game and have a seat behind home plate. The Home Run tour also gets you a team t-shirt and a guide to join you for the game. The average attendance of the National Series games are 15,000 fans. If you want the true Cuban game experience however, you might prefer to find your own way to a game. The home plate seating offered by the tour operators are often filled with tourists. Sitting elsewhere will put you amidst the screaming fans that can share their passion with you.