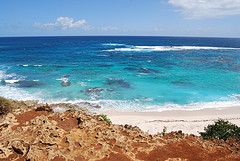 The caves at Two Foot Bay, Barbuda are unique caverns naturally carved out of limestone, which vary in size from undersized crawl-in holes to large rooms. Locals refer to these series of caverns as Indian Cave because Amerindians lived in these caves. Two Foot Bay is located northeast of the main city of Codrington on the prevailing wind side of the island on cliffs overlooking the ocean.

A narrow dirt path gently twists up the side of cliff to the cave entrance which is well hidden by abundant vegetation. After entering the cave, visitors climb down to a large circular chamber called Drop Cave. Advancing into the cave walking past stalactites and stalagmites, the next stop is Bat Chamber. This cavernous cavity is 35 feet tall, with bats hanging from the ceiling.

There is a small opening on the side towards the ceiling the bats use to fly in and out of the cave. The next chamber is a room with gaps between the ceiling rocks. The daylight shining through the gaps create a startling effect of making the cavity glow, hence, its name, Glowing Cave. Located along the walls are some rock drawings or petroglyphs which were drawn by the Amerindians or Arawaks. Many believe the drawings represent guardians protecting the cave from evil spirits.

These are the only petroglyphs on Barbuda. The last cave is Fig Tree Cavern. This cave has an opening with a view of the coastline. Many believe this served as a lookout post for the Amerindians village located not far from this cave.

How To Get There

To reach Barbuda Island, take a small plane from Antiqua to Codrington airstrip. It is a fifteen minute plane hop. After reaching Barbuda, remember that in Barbuda, vehicles are British style. That means the steering wheel is on the right and vehicles drive on the left.

To reach Two Feet Bay, drive northeast out of Codrington on a well maintained dirt and sand track. The road is one of the most accessible on the island.