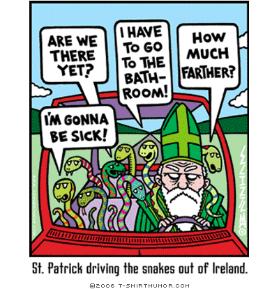 The Montserrat St. Patrick’s festivities include parades where islanders strut their stuff wearing shamrocks, which doesn’t sound unlike parades found in Boston or New York in the United States. But you can also rock out to calypso and string and steel band concerts, which is a little more exotic. Guiness lovers won’t be disappointed, but green be may be hard to find. You can feast on traditional dishes and explore the unique culture blending Irish and African influences. The Freedom Run from Cudjoe Head to Salem Park takes place during this week and Masqueraders dance in the streets in their traditional costumes and head dresses.

If you’d love to be some place warm n’ sunny to celebrate Ireland’s Saint’s Day, there is no better place than Montserrat.