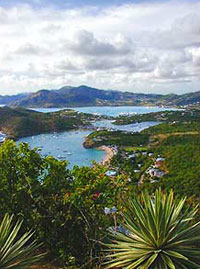 Shirley Heights is a former military fort found on the stunning island of Antigua. At the top, you’ll find former military buildings, big holes where guns used to sit, and all of the other antiquities you expect from a past military encampment. Even if you could care less about the fort or its history, the real reason to visit Shirley Heights is to enjoy the spectacular views of the area, with vistas stretching across English Harbor and Nelson’s Dockyard. The sunsets aren’t to shabby, either.

History: For those of you who are interested in the history of the area, this site is named for General Shirley, who was Governor of the Leeward Islands when the fort was created in the late eighteenth century. Steps away, you can see the obelisk honoring the soldiers of the 54th regiment at the cemetery. The site was so heavily fortified because the British had lost all of its colonies in the West Indies, with the exception of Antigua and Barbados. The Brits wanted to protect the area because of the lucrative sugar production on the island, as well as protecting Nelson’s Dockyard.

The Ridge and Artillery Quarters: The ridge is home to several ruins from the days of the fort. Structures found there include the Royal Artillery Gunner’s Barracks and the Train of Artillery building. These buildings were erected in 1790 for 60 men. After the army left, it became a lunatic asylum. Trippy.
Blockhouse: The Blockhouse is the Easternmost part of the fort and was designed as a last place of refuge. It contains ruins of the officer’s quarters, servant’s quarters, married quarters and stables. You’ll also find a fine powder magazine, cistern and catchment that have been restored. This spot offers great views. The Officer’s Quarters is in ruins as are the out buildings, servants quarters, married quarters and stables.

Getting There: To get there, you can hike up Lookout Trail directly from the harbor to reach Shirley Heights. Otherwise, take a cab or drive yourself.

Lookout Bar: Sunday afternoon is the time to visit this historic site. Lookout Bar is then the site of a great party with barbecue, rum punch, and the strains of steel band and reggae music to the bar. Food, drinks and views – what a great way to spend an afternoon! Bear in mind, descending Lookout Trail might not be the best idea after a few shots of rum punch, but no worries – you should be able to catch a cab. The admission cost on Sundays is $8 US. Day trippers are usually gone by 7:00 pm, so be patient and you can have some real fun. During the week, the Lookout Bar also offers Steel Band and cuisine on Thursday evenings. Thursday nights shows are FREE.