Save the Turks & Caicos Rock Iguanas 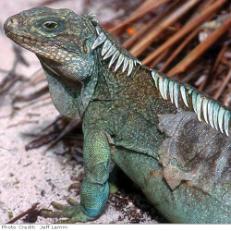 Turks & Caicos is one of those Caribbean destinations that has sold its soul for the tourist dollars. Development has run rampant in recent years, with resorts springing up on more and more of the nations many islands. That is, of course, disastrous to the indigenous wildlife of the area.

Sporting Club at Ambergris Cay has with Dr. Glenn Gerber of the San Diego Zoo’s Center for Conservation and Research for Endangered Species (CRES) to address this very issue. Dr. Gerber is working hard to preserve native Turks & Caicos rock iguana populations. According to the press release, “The preservation of the native iguanas is one element within the larger scope of the conservation-based planning approach at the core of DPS Sporting Club Development.” So at least someone is trying to create a sustainable tourism environment on the islands.

Ambergris Cay is home to the largest population of rock iguanas in the islands. It is also the private island residence of Turks & Caicos Sporting Club. The iguanas are listed as an endangered species and “is of extreme interest to both developers and members of Ambergris Cay, as the island remains the only location where humans and the rock iguanas co-exist.” I’d prefer the developers went home and let the iguanas have the run of the place, but that obviously isn’t going to happen on this prime real estate. There are now only a few uninhabited islands left where the endangered iguanas are free to live without interference from people and the predators they bring (like cats and dogs).

DPS Sporting Club Development provides all Turks & Caicos Sporting Club members with informative guidelines on how to co-exist peacefully with the rock iguanas. Something along the lines of “Don’t Touch the Iguanas” I’m sure.

Dr. Gerber and his team are working to capture populations of the rock iguanas and move them to Bush Cay, a small island just south of Ambergris Cay. Is that how to save an endangered species? Move them out of the way so the developers can do what they want with the species traditional environment. There must be a better way.

With the help of Ambergris Cay on-site naturalists, the team distributes iguanas to uninhabited cays that will be able to promote the continued regeneration of the species.

So, it basically sounds like the sporting club is helping to get the iguanas the hell out of their way. But at least they’re making an effort…

For more information on Dr. Glenn Gerber and the San Diego Zoo’s CRES, check out cres.sandiegozoo.org/projects/sp_anegada_iguanas_headstart.html