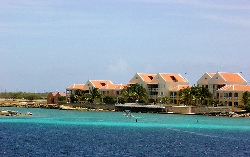 Bonaire is a small Caribbean island, located off the coast of South America. It’s particularly known as a diving and snorkeling spot. Generally it’s avoided by those wanting to just sunbathe.

Although a holiday destination year round, the peak tourist season is between Christmas and New Year’s. The high season ends in April. If you want to avoid the highest prices you should book your vacation either in early December or early April.

The hotel is built on a coral bluff overlooking a tiny beach and the sea. It’s located just 5 minutes north of the capital. It’s a divers’ resort, known for its informality. Most of the guests opt for a package which includes several dives. The accommodation ranges from standard double rooms to villas equipped with kitchenette. There is a restaurant and several bars within the resort. During winter (high season) expect to pay US$236-US$259 per night for a double room and US$265 per night for a suite. During the off season a night in a double room costs US$197-US$216, while a night in the suite costs US$240.

For Bonaire, this is a very large property. The resort is located on a strip of land midway between a saltwater lagoon and a sandy stretch of Caribbean beachfront. The apartments contain kitchenettes and simple furnishing but they are really specious. There are 3 restaurants, a bar, a pool, 4 tennis courts, a health club, a spa, as well as other services available. During winter (high season) expect to pay US$250-US$280 for a night in a suite and US$310 per night for a one bedroom villa. During the off-season a night in a suite costs US$170-US$250, while a night in a one bedroom villa costs US$210-US$280.

This nice resort offers both individual cottages and seafront rooms with private balconies. There are 2 restaurants, a bar, 2 outdoor pools, fitness center, casino as well as other facilities. During the winter (high season) expect to pay US$203-US$242 per night for a double room. During off season you’ll pay US$153-US$184 per night for a double room. During Christmas and New Year’s the rates are about 10% higher than the winter rates.