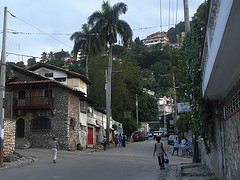 Petionville is an upscale suburb of Port-au-Prince which is located in the Southern part of Haiti. Petionville was given its name in honor of a freedom fighter, Alexandre Sabes Petion, who in the 19th century fought to help Haiti achieve independence before later becoming President. Although the official languages are French and Creole, Petionville offers a diverse cultural community with multiple national influences including French, Spanish, and African.

Petionville offers visitors a variety of activities as well as cultural and historic sights. Visitors can enjoy the beautiful Caribbean waters as they indulge in water sports or sunbathing on the lovely beaches. Tourists can also chose to spend their time enjoying a game of golf or tennis.

While walking through Petionville, visitors will be entertained by beautiful folk art, multiple types of music, African inspired dancing, or catching a sneak peek into the voo doo culture. Shopping, nightclubs, and casinos help to light up the night life.

Restaurants and pubs feature local cuisine which is as diverse as the areas heritage, although Creole and French are the most common fare.

While in Petionville visitors can enjoy a multitude of interesting and cultural sights.

National Palace is one of the earliest structures in Petionville. It was destroyed and then rebuilt in 1918.

Hotel Oloffson is a beautiful gingerbread style mansion that was built in the 19th century. The mansion was once home to two different Haitian presidents.

Cathedral de Port-au-Princewas constructed in the Neo-Romantic style of architecture. It is a site known for its cultural interest and activity.

Musee & Art Haitian du College Saint-Pierre is home to some of the best works of art from the country’s most talented artists.

Musee National is dedicated to preserving and displaying some of Haiti’s historical artifacts. The museum houses such artifacts as the pistol used in Henri Christophe’s suicide, and a rusty anchor reported to have been salvaged from Christopher Columbus’ ship the Santa Maria.