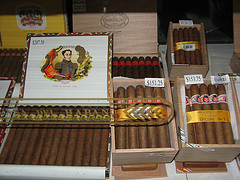 Next time you’re in Havana, look right behind the Capitolio in Old Havana, and you will find the Partagas Cigar Factory, the oldest in Cuba. It is an impressive colonial building, four stories tall, with iron balconies, that was built in 1845. Don Jaime Partagas erected the factory, shortly after he arrived from Spain. Since then, it has grown not only in the number of cigars made, but in their quality, and the worldwide demand for them.

It is the excellent quality of the cigars that are offered that draws cigar enthusiats from around the world to the factory. Through the years, production was steadily increased to reach today’s figure of seven million cigars per year. Partagas has a strict quality-control program, run by a manager who is chosen for his or her very good knowledge of cigars and tobacco, and who can smoke daily samples from the production, sometimes as early as before breakfast. The cigar wrapper leaves come separately in small, folded-up bundles which have already been selected for each size and brand.

The Paragas Cigar Factory makes some of the most well known and popular cigars in the world….Cohiba, Montecristo, Ramon Allones, Bolivar, Gloria Cubana and Romeo y Julieta, along with the extensive Partagás series. And although the $10 per cigar it will cost you may seem high, experts say the smoke it delivers is definitely worth it.

The Business of Making Cigars

Partagás is one of the largest Cuban cigar factories, but the Corona plant is bigger. Partagas employs about 700 people, mostly female and young as well as a large training workshop for the new generation of “rollers”. The factory is the best-visited one, with guided one-hour tours running like an assembly line, through the well-organized building.

The factory is separated into sequences, making it easier for visitors to understand. There are many guides who speak different languages…French, English, German, and Russian conducting the tours. The factory is not automated at all, so everything is done by hand by the workers. This includes the weighing of the tobacco, the counting of the wrapper leaves, the rolling of the cigars and the application of each individual cigar label.

There are about 25,000 cigars produced daily in the Partagas factory and approximately 120 million cigars leave the factory each year for destinations throughout the world.