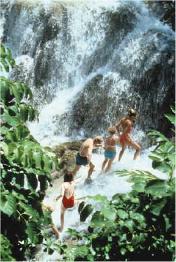 Ochos Rios Falls, otherwise known as Dunn’s River Falls, is one of the more popular tourist attractions on the island of Jamaica. I know what you’re thinking…eight rivers falls. However, the name of the place was not derived from the literal Spanish translation. Evidently, it was taken from Spanish word “chorreras,” meaning “waterfalls.” There aren’t actually eight rivers, so it makes more sense. The actual falls tumble more than 600 feet in to the sea, and many a tourist can be found “climbing” the falls each day.

Climbing the falls is a piece of cake. When I first heard of this adventure, I thought it may be quite a workout. In fact, you 70 year old grandmother could make the trip. Tourists are grouped together and strip down in to bathing suits. You pick a spot and hold hands with your fellow tourists, Hands Across America style, to ensure noone slips on the way. Frankly, I would have been better off without my handsy helpers, but it was still an easy trip. The grade is not steep at all. Think climbing stairs, rather than anything more technical.

During your climbing adventure, you’ll hand your camera off to one of the many tour guides. He or she (probably he) will happily snap photos of you periodically throughout the trip. The guide will expect a tip, and you shouldn’t cheap out at the end of the trip. Remember that he is trying to make a living and this is a very poor country.

I did enjoy making the trip to Dunn’s River Falls, although I’m pretty sure I wouldn’t do it again. It really is a beautiful spot, but quite crowded, especially on cruise ship docking days.

After exiting the falls, you’ll be confronted with the standard row of shacks offering tourist gear. The proprietors can be a little pushy, but again, they are just trying to make a living. Bargaining for prices is expected, which may or may not be an attraction for you. If you see something you like, go for it. It will surely be cheaper than the gear at your all-inclusive resort.