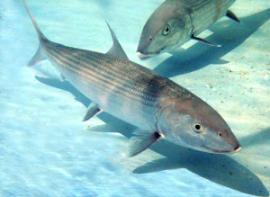 Bonefish are one of the most popular game fish found in the Caribbean. Anglers and marine lovers will be excited to hear that a brand spanking new species of Bonefish has recently been identified by geneticists at the Florida Fish and Wildlife Research Institute in St. Petersburg, Florida.

How do you find it? Unfortunately the new species can’t be identified by appearance. You can only tell the difference between the new, unnamed species and the two previously known by examining the DNA in the fishes dorsal fin. The discovery was based on samples of fish taken from the Florida Keys, the Bahamas, Mexico, and the Virgin Islands.

“Figuring out what’s in the fishery is a huge priority,” said Adams, who serves as director of operations and research for the nonprofit Bonefish & Tarpon Unlimited.

According to the Miami Herald,

Having the complete biological picture for bonefish is important because sport fishing is a multibillion-dollar economic engine in South Florida and the Caribbean. A five-year annual census conducted by scientists from the University of Miami shows every bonefish from Key Biscayne to the Marquesas in the lower Keys is worth $3,500 per year _ or $75,000 over its lifetime _ based on money spent on fishing tackle, boats and charters to chase the species.

That’s quite a valuable fish. Its easy to see why the experts are so intrigued about the animal’s life cycle and habits, none of which are known at this time.

The other two species of Bonefish, Vulpes and Garcia, are: