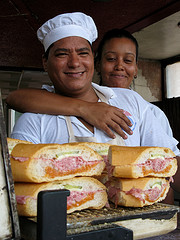 Cuban cuisine is a very unique blend of flavors, influenced largely by Spain, Africa, and the Caribbean Islands. Surprisingly enough, Cuban dishes are unlike those of its close neighbor, Mexico. Cuban cuisine utilizes many different spices including garlic, oregano, bay leaves, and cumin, but little to no peppers. Visitors to Cuba will often partake in Cuban tamales, stews, omelets, or sweet-and-sour Havana dishes. Popular dishes include the Cuban sandwich, rice and beans, ropa vieja, chicharrones, and Cuban empanadas.

The Cuban Sandwich
These sandwiches are especially popular with visitors and travelers because of their light taste and toasted Cuban bread. Cuban bread is traditionally a long loaf and has similar characteristics to those of French bread, but are made with lard giving them a distinguishing flavor. These sandwiches include meat such as roast pork and ham and Swiss cheese with toppings limited to sweet pickles and mustard.

Rice and Beans
Natives throughout Cuba use rice and beans for many meals during the day. They are often cooked using a recipe called “Moros y Cristianos” which means that the beans are cooked in a large amount of water, and then the rice is cooked in the same water as the beans. The spices involved in this dish include onion, garlic, oregano, and bay leaves and they give it a distinctive taste.

Ropa Vieja
This is a very simple dish which includes shredded beef in a tomato based sauce. This dish is native to Cuba, very widely served throughout Cuba and the Carribean, and is prepared with and without vegetables.

Chicharrones
This dish is primarily used for a snack between meals, and consists of pork with the skin and a layer of fat. Different versions include pork rinds which are can be simply made by deep frying the skin of the pork.