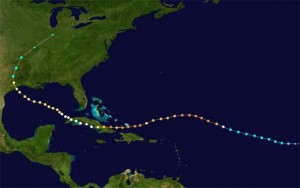 Hurricanes like the recent Hurricane Ike remind us all that in the battle between mother nature and humans, mother nature always wins, especially when you view the photos below in this post..

With the mass destruction of Hurricane Katrina still fresh on people’s minds (and many people still living in government housing in and around New Orleans), it was no wonder people fearfully geared up and bunkered down in preparation for Hurricane Ike as it gained increasing momentum and power rolling through the Caribbean and the Gulf of Mexico.

Making landfall in the Caribbean as a category 3 hurricane, Ike left a huge path of destruction as it crossed over Turks and Caicos, Haiti and Cuba before making its way into the Gulf of Mexico and headed straight for Louisiana and Texas. Ike has been blamed for 61 people in the United States alone, among 143 deaths in Haiti, where poor preparation in an already fragile economy and the strength of the storm sadly wiped out huge areas of the island.