Hotels in Turks and Caicos 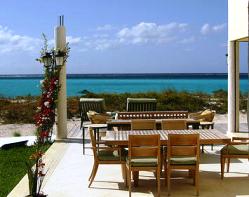 The majority of hotels are located within glamorous resorts and you’ll find some of the most popular of them on the award winning beaches of Grace Bay. There are budget hotels on the island but make sure to book well in advance.

The climate on the islands is arid compared to the rest of the Caribbean and the most rainfall occurs during the hurricane season (June to November). Over the years, the islands have been hit quite badly by hurricanes. The average temperature year round is 70 – 80 F but during the summer they temperature can climb to 90F.

The high tourist season lasts between December and April when the prices are at their highest. The low season, which is the same as the hurricane season, doesn’t see many tourists and most of the resorts located in exposed areas actually close over that period.

The resort wasn’t affected by Hurricane Ike and is open.

The hotel is open and hasn’t been affected by Hurricane Ike.

The mansion is just perfect no matter what you have in mind: a romantic escape, a family vacation or a weekend getaway. It stands right by the beach and offers both a restaurant and a bar for its guests. All rooms have AC, TV and Wi-Fi Internet. During the peak season the rates are US$175 per night for the upstairs rooms, US$150 per night for the garden room and US$85 per night for the Coachman’s Quarters (year round), excluding taxes.