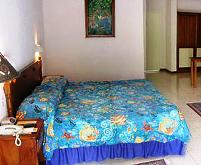 Haiti has been hit by a powerful hurricane in September 2008, leaving plenty of resorts and hotels to deal with reconstructions. There are still enough hotels operating and you’ll find them in the cities or close to the city.

The climate is tropical and semiarid in the mountains. Haiti lies in the middle of the hurricane belt and is severely hit by storms between June and October. Droughts, flooding and even earthquakes are quite common.

The high season lasts between December and April, when the prices are at their highest. The low season is represented by the hurricane season but prices generally drop in May and stay like that until end of November.

The 5-star hotel is located away from the hustle and bustle of Petionville but at only 10 min walk from the boutiques and restaurants. There are 120 rooms all with AC, TV and Internet. During the high season the rate is US$138 per superior room. Discounts are available during the shoulder season (May and November).

The 5-star hotel is located in the center of Port-au-Prince, right in the middle of everything. It’s a small hotel, offering only 22 rooms, most of them with AC. Within the hotel there are: a swimming pool, a restaurant and a bar. There are special rates available and discounts but all can be obtained only on request.

This small 3-star hotel offers 50 rooms, all with AC, phone, kitchenette and TV. The hotel also offers a swimming pool, a racquetball court, a restaurant and bar. Special discounted prices are available. Both regular rates and package prices can be obtained upon request.