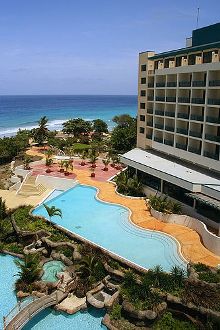 Most of the popular hotels are located on or close to the popular beaches on the island. Some of them are: Accra Beach, Bathsheba Soup Bowl, Casuarina Beach, Mullins Beach, and Silver Sands Beach. Most often, the hotels also offer access to private pools and beaches.

The climate is tropical, with the rainy season lasting from June to October. Due to its location, the island is not in the pass of hurricanes and storms. The dry season lasts from December to May and is also the high tourist season. The Trade Winds keep the temperatures around 80-85 F during the day and on average at 76 F during the night. The peak season is during Christmas and New Years. Prices generally start to climb in mid-December and won’t lower until April.

If you want to save some money on accommodation and airfare to Barbados, visit the island during the shoulder season: early December or April.

Barbados might appear a bit on the pricey side if you only check out the resorts. But if you plan to save some money on accommodation, it’s advisable to take a look at the hotels as well (and not those within the resorts). Combine this with visiting during the shoulder or low season and a vacation in Barbados can be affordable.

A tiny hotel, offering only 16 rooms, located at a short walk from Turtle Beach, Meridian Inn is a very good choice if you want to keep your budget low. During the high season a double room costs only US$99/night, while during the shoulder and low season you’ll pay US$69/night for the same room. The only “trick” is that you need to stay for at least seven nights. You can even cater for yourself since the rooms are equipped with a kitchenette.

A newly refurbished 3 star hotel, it offers studios and apartments equipped with everything you need. There are a swimming pool and a bar for the guests as well. During the shoulder and low season you’ll pay no more than US$67/night depending on what type of apartment you prefer. Prices are about the same during the high season as well, especially if you book online. You need to book the apartment for at least two nights though.