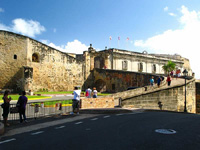 With a long history dating from the pre-Colombian era and dotted with wars and sieges, no wonder that Puerto Rico is filled with historic sights to explore. Designated as World Cultural Heritage Sites, the forts, bastions, walls and towers still have the colonial feel and you can almost hear the soldiers training and fighting to protect their city.

Puerto Rico is a self governing commonwealth of the United States of America, which has a long history dating to the pre-Columbian era. The archipelago which stands to the east of the Dominican Republic and west of the U.S. Virgin Islands was visited by Christopher Columbus in 1493 on his second voyage of discovery. San Juan, the capital, honors the name Columbus first gave the island: San Juan Bautista.

His arrival meant the start of the Spanish colony era. Puerto Rico’s strength grew and several forts and walls have been built to protect the capital from the European enemies. In 1898, Spain ceded Puerto Rico to the USA after the Spanish-American War. In 1947, Puerto Rico was given the right to choose their governor and hence became part of the Commonwealth of USA.

The defensive structures which make up San Juan National Historic Site surround the old, colonial part of San Juan. In 1983, the entire site has been designated as a World Cultural Heritage Site.

El Morro is located on top of a high promontory overlooking the entrance to San Juan Bay and is the largest fort built by the Spaniards in the Caribbean. Make sure to check out the hidden passages. The site can be explored everyday from 9:00 am to 5:00 pm from June to November and 9:00 am to 6:00 pm December to May.

Fort San Cristóbal (see photo top right) once guarded the eastern gate to the city and was the biggest fort built by the Spanish in the New World. Better known than El Morro, San Cristobal was designed to protect the city from the inland threats. The views offered are spectacular and make sure to stroll on the ramparts for a complete experience of the place. The opening hours are the same as at El Morro. 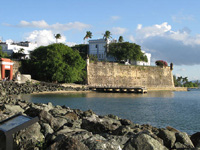 La Fortaleza (see photo right) was the first fortification built in San Juan harbor and currently is the official residence of the Governor of Puerto Rico. The original fort consisted of a circular tower and four massive walls. In 1846, the fort was enlarged but the original tower, now called “Torre del Homenaje”, still stands.

The Historic Zone comprises the city itself with museums, buildings, commercial buildings, churches and plazas. San Juan had the first municipal government in the New World and by the 19th century the old city has become a charming colonial district. Today the Old San Juan is a lovely place to enjoy sightseeing and breathing some history.

At Boquerón beach you’ll find the ruins of what used to be a small four-cannon defensive battery.

This is one of the four ammunition storage buildings the Spanish built as part of the San Juan defensive system. Once a museum, then a zoo, the building has been recently restored.

It still houses Puerto Rico Legislature and is a powerful symbol of Puerto Rico’s self-government. The building dates from 1907 but the dome wasn’t added until 1960. The interior is designed with mosaic and murals depicting Puerto Rico’s history. Guided tours can be arranged by appointment only, Monday to Friday between 9:00 am and 5:00 pm.

Other historical sites in Puerto Rico

Many historical sites can be found in the entire archipelago. Among the most important we can list: