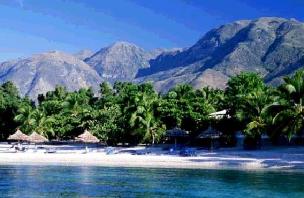 Haiti, officially the Republic of Haiti, is the less touristed half of Hispaniola, the island that is also the home of the Dominican Republic. The powers that be in Haiti don’t like trees. Or that’s how it appears, considering the massive amount of clearcutting on the island. The deforestation has, not surprisingly, lead to other problems like soil erosion and mudslides. Haiti is not a very developed country, and the tourist infrastructure is scanty at best Before you give up, Haiti offers a rich culture and artistic traditions. However, the U.S. State Department has a long running Travel Warning for people considering visiting the country. If you’re planning on visiting anyway, shoot for the winter months when the country is at its driest. There are travelers who love the place, so don’t think it’s all bad. Keep in mind you can get the same glorious coast line of the Dominican Republic for a fraction of the price.

French is the official language of Haiti, but Creole is more widely spoken. Many Haitians near the DR border do speak Spanish.

The Haiti Gourde is the official currency of Haiti. U.S. dollars are widely accepted. To find out about the conversion rates, visit our currency converter.

Regardless of your budget, you can find a place to rest your head in Haiti. Hostels start at a low, low $5.00 per night. For the upper crust, swanky accommodations can be had for about $140 per night.

Like Haitian culture, the cuisine is mainly influenced by the nation’s French and African heritage.

Carnival or Mardi Gras is the big hoo-rah in Haiti each year.

Port-au-Prince International Airport is the main port of entry in to the country. If you’re traveling from the DR, you can take either Ouanaminthe near Santiago or the Malpasse/Jimaní crossing between Santo Domingo and Port-au-Prince. You can fly on Air Canada, Air France, Air Caraibes, ALM, American Airlines, American Eagle, Copa, Haiti Trans Air, Halisa Air, Hanair or Lynx. Be prepared to pay the $25 departure tax when leaving the country by air.

Buses and minibuses are the more popular means of transportation on the island. You can rent a car, but it isn’t advisable.

Learn all about Voodoo, the fascinating, widely misunderstood religion practiced by most Haitians, who believe the practice can coexist nicely with their traditional Catholic beliefs. Haiti is an island nation, with the beaches to prove it. Hiking opportunities do exist. Haitians are known as accomplished artists, so checking out the offerings is a must.