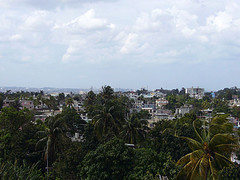 Located east of Havana Harbor is the barrio or municipality of Guanabacoa. This once small colonial town has been absorbed into the urban Havana (Cuba). Some residents believe Guanabacoa, or “place of waters” is a bewitched town, but many believe it is just an old town with a rich history and classic Spanish-Cuban architecture.

The main park of Guanabacoa is built on a hill overlooking rivers and natural mineral springs, which abound in the area. The area was inhabited by natives, Tainos, before the Spanish arrived in 1492. Soon Africans slaves arrived to work the sugar plantations. The Africans brought with them their music and religion and integrated it into the local culture. Guanabacoa became the center of the Santeria, an Afro-Cuban religious tradition.

Cementerio de Judios or Jewish Cemetary – This cemetery was founded in 1906. An impressive monument honors the victims of the World War II Holocaust.

El Carral – Built in 1850 to be dance salon, it was later used as a movie theater. Though in disrepair, it is still a stately example of Cuban architecture with white columns supporting a breezy portico and long narrow windows decorated with iron wrought window baskets.

Many churches are scattered throughout the barrio, but there are three exceptional examples of colonial architecture.

La Ermita de Potosi – This relic church was built in 1644 and is believed to be the oldest church in Cuba; it has traditional Spanish architecture complete with a large arched doorway and a square bell tower.

Los Escolapios – Los Escolapios is now a school, but originally it was a church built in 1714. It exhibits the Classic New World Spanish architecture with three large arched doorways and pyramid-shaped front.

Nuestra Senora De La Asuncion – Built in 1721, this church is dedicated to the patron saint of Guanabacoa

How to Get There

Buses run to Guanabacoa from downtown Havana, and a train runs from Havana to Guanabaco also. If a car is available, take Via Blanca south to Indepencia Veste, then turn east and drive into Guanabacoa.