Getting from Santo Domingo to Punta Cana 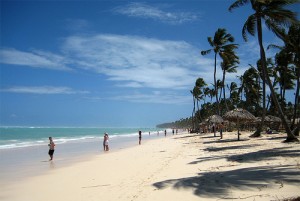 Santo Domingo is the capital of the Dominican Republic . It is also the oldest European city in the Americas, founded by Christopher Columbus’s brother Bartolome Colombus in 1496. Gazcue is one of the city’s oldest neighborhoods and is a pleasure to walk around to see the Victorian houses.

Punta Cana is located on the easternmost tip of the Dominican Republic and offers quick access to major resort areas, such a s Bávaro and Uvero Alto.

The Dominican Republic is located within the hurricane belt, which means hurricanes can hit the areas from June to November. The high season lasts between December and April.

The cheapest way to travel between Santo Domingo and Punta Cana is by bus. It takes about 4 hours and costs less than US$10 one way.

La Isabela is hub for Aerolineas Mas, Air Century, Caribair, SAP Air and VolAir. It opened in February 2006 and serves mostly domestic flights, although there are a limited number of international flights , too.

Punta Cana International Airport (PUJ) is a privately own airport , serving Punta Cana. It is not hub for any airline.

Flights from Santo Domingo to Punta Cana are operated by: Air Century and Air Inter Island. None of the flights are listed in major booking sites, so you are left with searching on each carrier’s website. The flight time is 1 h.

For example, the single fare on Air Century in early June 2012 is US$80.25. The same fares apply during the entire low season.

>>book a flight to the Caribbean

Expreso Bavaro operates buses between the two cities. The travel time is about 4 hours and the single fare is RD$375 / US$9.65.

The Bavaro Bus Station in Punta Cana is located a block south of the Friusa Intersection. You can purchase the tickets directly from the station. In Santo Domingo there are two bus stations where the bus stops: one is near Avenida Maximo Gomez and the other in front of Parque Enriquillo.

There are two buses per day from Santo Domingo, departing at: 8 a.m. and 2:55 p.m. On the way back, the buses depart at the same hours from Punta Cana.

You can also rent a car and drive between the two cities. There are two routes, both taking about 3 ½ h. The shortest is 218 km on Carretera Mella. But the longer one, 227 km on Autopista del Este, has a long section right by the sea shore so the excellent views are guaranteed.