Getting from Aruba to Curacao 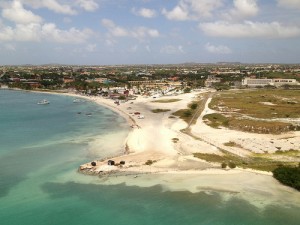 Aruba is located 15 miles from the coast of Venezuela and is an autonomous dependency of the Kingdom of the Netherlands. The island is well known for its white sand beaches and the almost constant temperature (27C/81F). The island is located outside the hurricane belt so no one needs to worry about too much rainfall.

Curacao is part of the ABC Islands, together with Aruba and Bonaire . It is also close to Venezuela and outside the hurricane belt. Just like Aruba, it’s also a Dutch island, complete with building styles you’d find in the Netherlands.

There aren’t any ferries between the two islands, so the only choice is to catch one of the flights. If you book your flight in advance, chances are you won’t pay too much for it.

Aruba is served by Queen Beatrix International Airport (AUA), located in Oranjestad. It is hub for Insel Air and Tiara Air. It handles flights to/from the North America, other countries in the Caribbean, South America and Europe.

Curacao is served by Hato International Airport (CUR) , located in Willemstad. It is hub for Dutch Antilles Express, Divi Divi Air, EZAir and Insel Air. It is quite a large airport handling flights to North America, Europe and other countries in the Caribbean.

Flights between Aruba and Curacao are operated by: Dutch Antilles Express, E-Liner Airways, Insel Air and Tiara Air. The flight time is ½ h. In mid-June 2012, expect to pay from US$63 one way on Dutch Antilles Express. A return flight starts at US$120 on the same airline. Even during mid-December the fares stay the same. However, they might get higher if you don’t book in advance.

>>book a flight to the Caribbean