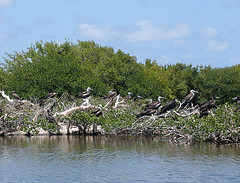 Frigate Bird Sanctuary is located in the Codrington Lagoon in the Northwestern part of Barbuda. The Sanctuary is the Caribbean’s largest nesting colony of frigate birds. Home to over 170 species of birds and 5 species of Frigates, the bird sanctuary is an avian enthusiasts dream. It is also one of the top tourist attractions for the Barbuda and Antigua communities.

Information about the Sanctuary

Frigate Bird Sanctuary is found in the green, brackish waters of the Codrington Lagoon. Within the lagoon is a series of mangrove trees that form Man of War Island, which is the nesting place for the Frigate birds.

The island is named after the Frigate birds, which get their nick name “Man of War’ because of their tendency to stalk and harass other water birds in a war like manor in order to steal their fish. Frigate birds are the oldest known avian species, having been traced back as far as 50 million years. The Sanctuary is home to over 5000 Frigate birds, as well as pelicans, warblers, snipes, ibis, herons, king fishers, and tropical mockingbirds.

Frigate Bird Sanctuary is only accessible by boat. Visitors must arrange a tour with a local tour guide.

Visitors to the sanctuary will be able to enjoy the Frigates as they demonstrate their aerial prowess. As you approach the nesting grounds, mother birds will take flight leaving their young perched in their stick nests, which can be as large as nine feet by twelve feet in size. The males can be seen flying along side the females. The Frigate’s can have a wingspan up to eight feet.

Weather in the Sanctuary

The weather ranges from 76 degrees to 83 degrees year round.

The sanctuary is open from dawn until dusk every day year round. However, the most exciting time to visit is during the mating season which runs from September through April.

All tickets must be purchased at the wharf, and vary in price based on the tour guide you choose.