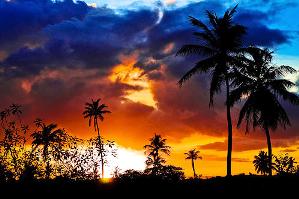 Although quite remote, Trinidad & Tobago gets a lot of tourists and attention, hence making it easy to find cheap plane tickets.

Port of Spain’s Piarco International Airport (POS), located at 27 km / 17 miles from Port of Spain on Trinidad, is the country’s most important airport and where the airplanes from North American arrive. American Airlines offer direct flights both from their Miami hub and Puerto Rico hub (via American Eagle). Delta offers direct flights from Atlanta, while Continental flies from Huston.

Tobago International Airport (TAB), located in Crown Point, is the other airport, where the European, South American and local Caribbean airlines arrive. Both British Airlines and XL offer direct flights from London into Trinidad & Tobago.

Tips to get a cheap ticket to Trinidad & Tobago

The peak season is represented by Christmas and New Years, while the high season extends until end of March. However Trinidad & Tobago receives visitor all year round so if you want to save some money, plan to visit during the shoulder season: early December or early April.

Make sure to book well in advance no matter when you fly and also try to avoid the weekends by flying during mid-week (Tuesday and Wednesday).