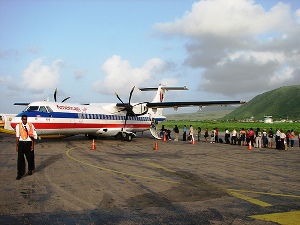 Frequent flights into St. Kitts & Nevis, both long-haul and local, makes it possible to find cheap flights into the island but not necessarily very easy.

US Airlines and Delta offer direct flights into St. Kitts & Nevis, mostly from their Miami hub. Other options are also available. American Airlines fly directly into the island from Puerto Rico via their local subsidiary American Eagle.

If you fly from Canada, you can catch a directly flight on Skyservice from Toronto, but only during the high season.

If you fly from Europe you can catch a direct flight on XL Airways from London. Additionally any flight into Puerto Rico is a good choice as you can fly into St. Kitts & Nevis via American Airlines’ local subsidiary.

Tips to get a cheap ticket to St. Kitts & Nevis

Overall, the cheapest alternative proves to be the American Airlines flight, especially when you fly from US. If you depart from Europe it’s worth looking at different possibilities even if it means a stop in Puerto Rico.

The season extends from the week before Christmas until end of March. There are more flights than during the rest of the year but you also need to book well in advance. Generally the lower prices are during the shoulder season: early December and early April.

If you tend to book your flight too late, try to fly mid-week since the weekend flights book up first.