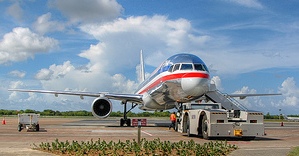 Dominican Republic is one of the largest countries in the Caribbean, which helps a lot when it comes to finding cheap airfare. Frequent fights which cater for the expats living in the US also help keep the fares rather low.

The most important airport is Las America (SDQ) near the capital of Santo Domingo. Just like in the rest of the Caribbean, American Airlines has the lowest fares and most frequent flights from Puerto Rico , which is easily reached from any corner of the US and Europe. Delta Airlines flies directly into Santo Domingo both from Atlanta and New York, while Continental offers direct flights from Newark.

If you depart from Europe, there are direct flights to the Dominican Republic both from Paris and Madrid, which are easily reached from the other European countries.

Tips to get a cheap ticket to Dominican Republic

If you want to visit during the peak season –Christmas and New Years – you should book well in advance. Although the country has lovely climate all year round, the high season extends from January to March. Booking your flight during the shoulder season –early December and early April- can save you some money. Additionally, look into flying during mid-week (Tuesday and Wednesday) and avoid the weekends.