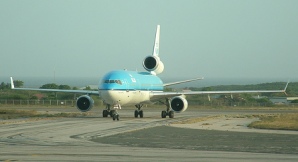 Queen Beatrix International Airport (AUA) is the international airport located in the capital, Oranjestad, of this Dutch island. Although the national airline doesn’t offer any direct flights to Aruba, several US and European airlines make it easy to travelers to fly here.

If you depart from Canada, catch Air Canada’s flight to Aruba from Toronto.

If you depart from Europe, both KLM and Martinair offer frequent flights to Aruba from Amsterdam, making it easy to connect Aruba to pretty much any major European airport.

Tips to get a cheap ticket to Aruba

With that many airlines offering flights to Aruba, getting a cheap ticket is just a matter of timing. Here are some tips to find cheap airfare to Aruba: