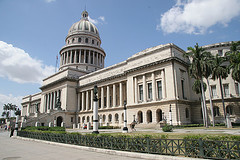 A trip to Havana, Cuba is not complete without visiting El Capitolio. At first sight El Capitolio appears to be a replica of the United States Capitol in Washington D.C. However, the capitol’s builder claims to have had the Pantheon in Paris in mind when the structure was designed. The building which was completed in 1929 was the tallest building in Havana until the 1950’s.

It is now the second tallest building in Havana. El Capitolio was the home of the Cuban House of Representatives until the revolution in 1959. Since then it has been home to three museums and a planetarium. El Capitolio currently houses the National Library of Science and Technology.

Upon arriving at El Capitolio you will find a structure that is larger and more elaborately decorated than the United States Capitol building. El Capitolio houses the third largest indoor statue of Pallas Athena (the goddess of truth), which is named the Statue of the Republic. The statue weighs 49 tons and is covered with gold. Visitors will also not want to miss a copy of a 25 carat diamond that appears to be inlaid in the floor.

The main hall of El Capitolio is surrounded by Salon de Pasos Perdidos (Hall of Lost Steps). The hall has floors of inlaid marble and features lamps with gold overlay. The halls lead to what were previously the offices of Cuba’s Parliament and Chamber of Deputies. Visitors are free to walk around and may visit the Library of Science and Technology on days when it is open to the public. El Capitolio also features an internet café, a restaurant and art galleries.

Admission is $3 for adults and children under 12 are free.

How to Get There

El Capitolio is located on Paseo di Marti (Prado) in Havana. The building is easy to get to as it is visible from almost everywhere in Havana.