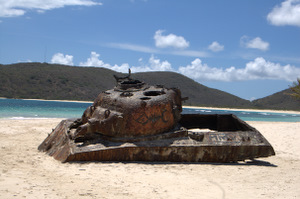 Culebra, a small island in Puerto Rico, is a stunningly beautiful slice of the Spanish Virgin Islands. Nestled a short 17 miles from Puerto Rico and only 12 miles from St. Thomas, this haven offers vacationers a much more Caribbean vibe than the mainland, as well as a safer alternative to its crime-prone neighbor Vieques. You don’t even need to speak a lick of Spanish on Culebra, my sister didn’t. Just sit back, relax, and enjoy one of the world’s few Blue Flag beaches at Playa Flamenco.

Whether you arrive by air or by ferry, you’ll begin your visit in the laid-back town of Dewey. Cargo ferries will transport rental cars, space available, and passengers throughout the day. For those of you visiting by air or sans rental car, transportation is a breeze with several reliable local taxi drivers (most of whom speak English) and frequent daytime shuttles between Dewey and Flamenco Beach.

The island is startlingly uninhabited compared to the mainland. Mostly because the U.S. Navy (my father) used it for target practice for many years. Yes, the Navy did clean house as they were leaving but finding old explosives is not unheard of. A good deal of the island is restricted as a nature reserve, and I suspect as the portion where one would be more likely to run in to a stray shell.

Accommodations on Culebra are found in town, with only camping and the Flamenco Beach Guesthouse available on the beach. The prices are in line with those on the mainland and probably inexpensive compared to its Caribbean neighbors. For those of you on a budget, your only option in camping on Flamenco Beach. 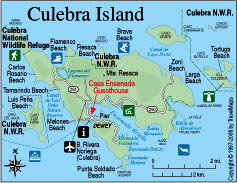 Dining establishments are varied. You can score a bagel at the bakery or partake in some excellent seafood, the best of which is Mamacita’s. The Dinghy Dock is also a popular option in town, with decent happy hour deals. At Flamenco Beach, there is a row of dilapidated kiosks (that are in the process of being rehoused). The proprietors show up when the mood strikes, so dining on the beach (especially during the early part of the week) may not be possible. The mango juice is outstanding, as are the chicken kebabs. I would avoid the burgers and hotdogs at the last stall, unless you’ll otherwise die of hypoglycemic shock. Oh, and the Pina Coladas are oddly rum-free. Buy your own pint (or whatever quantity you need) in town and DIY. I really recommend Don Q rum for those of you who are looking to drink like the locals.

Culebra offers travelers a Caribbean vacation at Puerto Rican prices. Most of the businesses on the island are run by ex-pats, so don’t expect to score any great bargains. Luckily, development on the island has been low key and if the locals have any part in the deal it will remain so. Get yourself to Culebra, whether by ferry or your own luxury yacht, spend a few days diving, exploring or just lying on the beach, and experience the little-known Spanish Caribbean.