Carnival in St. Vincent and The Grenadines 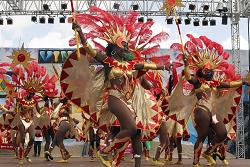 Carnival, colloquially known as Vincy Mas, is held in St. Vincent and the Grenadines at the end of June and beginning of July each year. Originally, the festival took place during the traditional carnival season just before Lent. But in 1976, the CDC which is the Carnival Development Committee not Center for Disease Control, made the decision to change the date from February/March to June/July starting the following year. I’m not sure the reasoning for the change, but the tradition has held to this day. Much like other Carnival festivities in the Caribbean, Vincy Mas is a celebration of African culture, European tradition, and Caribbean folk lore, making for one heck of a party.

Vincy Mas events include The Miss Carival Show, a leading Caribbean beauty pageant, as well as the Mardi Gras Parade of the Bands where Masquerade Bands compete for Band of the year. The Dimanche Gras Show highlights the finals of the National Calypso Monarch Competition, King and Queen of Carnival and Panorama. The Soca Monarch Competition in Victoria Park is another major attraction. For the little ones, there is the Junior Carnival, Junior Calypso, Junior Soca Monarch and Junior Panorama.