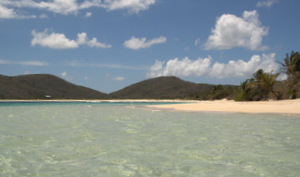 For those of us on a budget, camping is the only accommodation option in Culebra, Puerto Rico. The one and only government run camp ground is located right on beautiful Playa Flamenco, which is exactly where you’ll want to spend your days anyway. Camping in Culebra can be an exercise in frustration for those of you without a vehicle, but you can get by if you’re made of pretty stern stuff.

The Playa Flamenco Campground is officially run by the government of Puerto Rico. Posted office hours are 7:00 a.m. to 7:00 p.m. During our stay, we quickly found that campground hours are subject to island time. Upon arrival at the campground, we found the office to be deserted at about 6:30 p.m. Not to worry. If this should happen to you, pitch your tent and be prepared for someone to wake you up at about 6:00 a.m. to get you checked in.

As I mentioned before, there is a row of dilapidated kiosks (that are in the process of being rehoused) at the entrance of the campground. The proprietors show up when the mood strikes, so dining on the beach (especially during the early part of the week) may not be possible without self-catering. The mango juice is outstanding, as are the chicken kebabs. I would avoid the burgers and hotdogs at the last stall. The Pina Coladas made beachside are rum-free, as it is illegal to sell alcohol on a Blue Flag beach. Buy your own pint (or gallon or whatever quantity you need) in town and DIY. I really recommend sampling the Don Q rum for those of you who are looking to drink like the locals. Be careful, though! The kiosks close shop fairly early in the day. You should plan on cooking in one of the designated grills or taking a taxi in to town for dinner. There are no restaurants or shops within walking distance of Playa Flamenco.

The campsites are split in to designated sections. We were advised to camp in Section A, as it was closest to the office, well lit and “the safest.” I did not at any point feel unsafe while camping at Playa Flamenco, and kind of wish we would have struck out to the more remote and quieter sections. Noise was a serious problem in the camping areas. We heard several theories on the topic, including that we were visiting during a busy time for college students and that it’s just always loud because there is noone around to stop the noise. If you’re a light sleeper, take your earplugs and camp as far away as possible from other people.

Playa Flamenco Campground is fairly remote. If you don’t have a vehicle, you’ll have to depend on either the shuttles that run between the beach and Dewey or private taxis. The shuttles run quite frequently during the day, but stop around sundown. After hours, you can check the list of taxi drivers, including Miguelito at (787) 473-2594. Shuttles and taxis are reasonably priced. You should never pay more than $3 or $4, with the exception of early morning pick-up’s which are $5.

This is probably the best part. There are regular flush toilets found in the campground. TP supplies tend to run low, so it wouldn’t kill you to take your own. But the showers, oh…the showers. The showers at Playa Flamenco Campground are like practice ground for the television show fear factor. During the dry season, the outdoor showers (and the only showers in the park are outdoor) are absolutely covered with bees. You’ll get bees in you shampoo, bees on your shoes, and the occasional bee on your body. Your showers in Culebra will definitely be unforgettable.