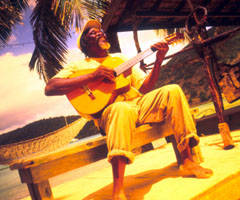 The British Virgin Islands is the half of the Virgin Islands archipelago owned by the British. American citizens DO need a passport to visit these islands, where the islands of the U.S. Virgin Islands are fair game for travel. Tortola, Virgin Gorda, Anegada and Jost Van Dyke are the main islands in the chain, though there are numerous other islands and cays with great names like Great Thatch and Necker Island. Island hopping is very popular, allowing you the opportunity to see several of the above. The British Virgin Islands are tropical, with the driest months being February and March. These islands are in the hurricane belt, so if you’re planning a visit from June to November, be sure to check the forecast.

The official language of the British Virgin Islands is English.

The U.S. dollar is the official currency of the BVI. To find out about the conversion rates, visit our currency converter.

Accommodations run the range in the BVI, with everything from cottages, hotels, resorts, inns, apartments, guest houses, and villas. Camping is available in some spots in the British Virgin Islands, such as Brewer’s Bay Beach on Tortola. Hostels can be found on Tortola as well, with prices starting at about $28 per night. Beyond that great deal, hotel rooms begin in the $170 range.

The guys might want to check out Viking’s Exotic Resort, for a dash of sex tourism in the true Caribbean style.

Dining establishments run the range from beach shacks to upscale restaurants. You should be able to find some place to fill your belly, regardless of your budget.

>>more information on the Best Restaurants in the BVI

You can’t go for long on the British Virgin Islands without some sort of great event happening on one of the islands.

There are no direct flights from the USA, Canada, Europe or South America to the BVI’s main airport, the Terrence B. Lettsome Airport (EIS). So it won’t be the quickest trip, but that may keep some of the tourist hoards out of the place. To get there, you’ll have to connect from one of the other Caribbean islands such as Puerto Rico, St. Thomas, Antigua, St. Kitts, or St. Maarten/St. Martin. You can also fly in to the Virgin Gorda Airport (VIJ).

You can make it to the BVI’s by boat as well. Ports are located Road Town and the West End on Tortola, Great Harbour on Jost Van Dyke and St. Thomas Bay in Virgin Gorda. If this is your transportation choice, bear in mind you will have to clear Customs and Immigration immediately upon arrival. A valid passport and boat registration papers may be required.

Electricity in the BVI’s is 110 volts, as in the United States.

Sailing The Sir Francis Drake Channel, visiting the numerous islands along the way is the big draw to the BVI. Beaches abound on the islands, ranging from surfing beaches like Apple Bay Beach and Josiah’s Bay Beach to swimming and sunbathing beaches like Smuggler’s Cove and Elizabeth Beach. All of the standard ocean side activities are available like windsurfing and snorkeling and fishing. BVI is full of National Parks and historic sites. You can dive at Dead Chest Island or visit the bird sanctuary at Fallen Jerusalem National Park. If that isn’t your cup of tea, you can visit the ruins at Little Fort National Park or the Copper Mine or explore the huge granite boulders at The Baths.

Music is very important in the islands. Calypso from Trinidad and reggae from Jamaica have been imported heavily. Fungi is the main indigenous music. Fungi uses improvised instruments like gourds and washboards to make a kind of music called quelbe. You should definitely make the time to hear some local tunes during your visit.