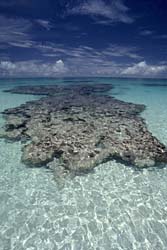 Barbuda is one of the leeward islands of the Caribbean and part of the State of Antigua and Barbuda, which makes it kind of like Antigua’s little brother. It is a sparsely populated island, with most inhabitants making their homes in the city of Codrington. When the largest city has a population of about 1,000, you know you really are getting away from it all. Barbuda stays nice and warm year round, making it a perfect escape from the North American winter.

The official language of Barbuda is English, but many of the locals speak Antiguan Creole.

Cash money is a little hard to come by on the island. You can use the Antigua Commercial Bank near the Codrington Airport, which is open on Mondays from 9 am to 4 pm, on Tuesdays, Wednesdays, and Thursdays from 8 am to 4 pm, and on Fridays from 8 am to 3 pm. As with Antigua, the official currency is the Eastern Caribbean Dollar. To find out about the conversion rates, visit our currency converter.

There are four whole hotels on the island, including the K Club, the members only Coco Point Lodge, North Beach and The Beach House. You can also look in to the several small guest houses in the village, which offer accommodations ranging from single rooms to self-catering cottages.

As a speck of an island, Barbuda doesn’t offer the numerous dining establisments available on its neighbors. I LOVE that you can count the number of places on one hand. According to the tourism website, there are two restaurants on the island, as well as several snack shops and five or six bars. These places cater to the locals, rather than the tourist, which make them hugely attractive to me. The thing is that tourists very seldom wander away from their hotels, so you can soak up the atmosphere without dealing with tables full of Americans ruining the vibe. The suggested best way to buy local food is to visit a food fair or fish fry on the weekend. There are always people barbecuing on the street and the fish is always fresh from the sea. Local specialties at food fairs include deer meat, land turtle, lobster, crab, conch, local beef and lamb or goat, with side dishes of rice, fungi, or dumplings. Local drinks include soursop, ginger beer, sea moss, and tamarind juices.

There are no international flights available to Barbuda, which is precisely how the island has kept its untouched quality. Two twenty minute flights are available daily from Antigua. Alternately, you can take a three hour boat ride from the same island. To get around the island, you can take a taxi, tour bus or rent a mountain bike.

Electricity in Barbuda is 230 Volts, alternating at 60 cycles per second. If you’re from the U.S. or Canada, you will need a converter.

You can visit the Frigate Bird Sanctuary, colonial homes, and see the Indian petroglyphs at aptly named Indian Cave. The island standard activities are all available, including beach combing, fishing, golf, tennis, snorkeling & diving, sunbathing and even hunting, which makes it the true Redneck Riviera. The island is so tranquil, you can very likely have a whole beach to yourself.